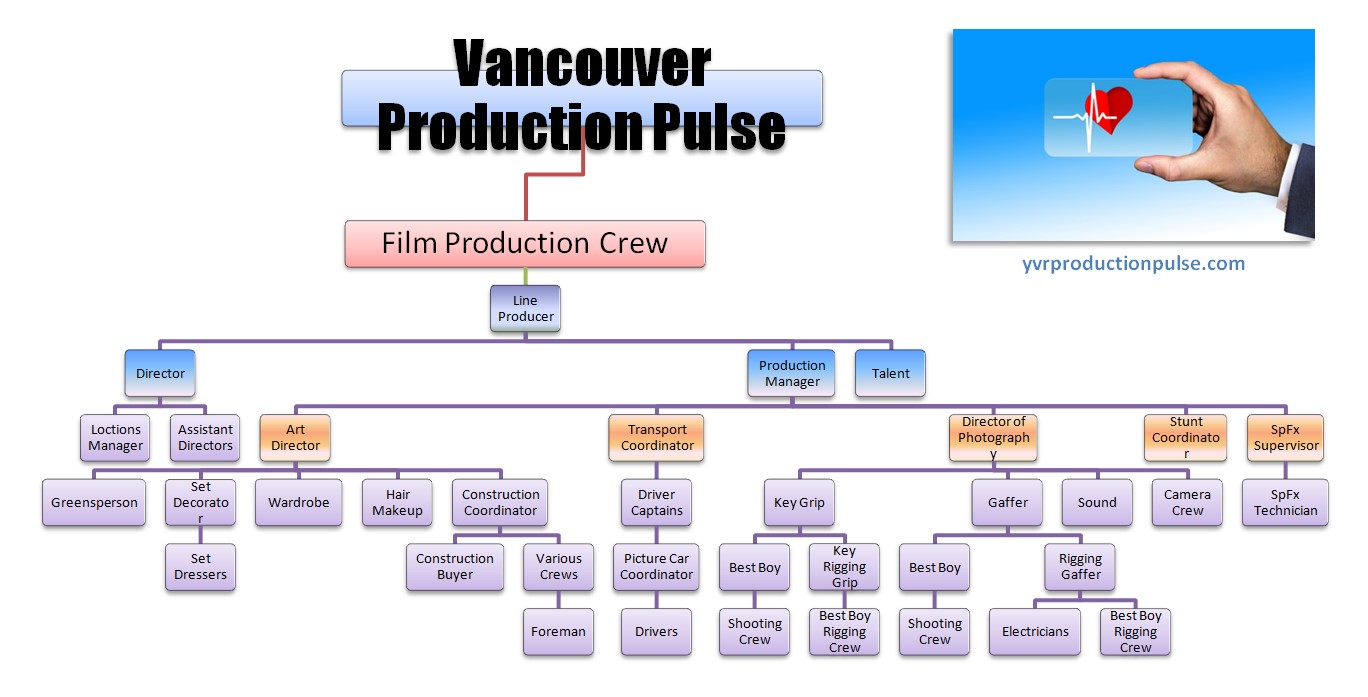 In this column we will illuminate the roles among the crew of a typical production, of which there probably is no such thing. It will be easy to say things were missed and we will keep adding anything you ask us to. As for errors, please let us know right away so we can correct them. Do remember, however, things often change and we are presenting our best portrait of the film crew as it exists today in Vancouver BC.

For our purposes, “film crew” includes only those who are directly involved in capturing images and sound. See the org chart above. This is most of what we will cover. It does not include everyone who has worked on the film prior to shooting through, to the post production process, and all the way to distribution and marketing. Those things take a lot longer than the actual shooting.

Where we can, we are going to get you interviews with one, or several of the people who do each job. If you have questions to ask, let us know and we will try to fit them in.

The first role we’d like to cover is actor. The actors are, obviously, integral to the production but did you know they spend the least time on set? Yes, they do. They need to be well rested and prepared so they can perform their best. Otherwise, the rest of the crew is wasting their time. This is why actors are catered to on set. The entire crew wants them to be their best so they do everything they can to remove stress and distractions for the actors.

You probably know some actors make a huge amount of money. They do, but it is important to note that only a very few of them do, and that money stream can (and will) stop someday. Each time wrap is called, the actor is usually unemployed. Most actors are up against a large number of other actors for each role. They usually do not make a living and are forced to have a day job.

In contrast, almost everyone else on the crew is paid well. But they work incredibly long hours; often 14-16 hours a day, five days a week. If an actor gets more than two days, he or she is very happy. They are paid a lot per day but they don’t work often enough for it to matter. An actor is busy if he or she works 25 days a year. It is MUCH harder for women because there are more women competing for each role, there are far fewer roles for women written and there is a pretty strong prejudice for looks that is worse for women than it is for men.

Racism and ageism are also identified problems and some in the industry are doing what they can to change that. Relatively few non-white people are behind or in front of the camera. Things have changed a lot for some women’s roles lately but there is still a long way to go to fight bias and embrace the diversity that more accurately represents the population of North America. (Stepping off the soap box now).

A business school professor at a local university was quoted as saying, “You cannot have more than one union on a job.” I don’t know what he thinks goes on with plumbers, carpenters, electricians, etc on a construction site but I could tell him he is dead wrong about a film shoot. There are five unions operating on most film and television productions in Vancouver: UBCP/ACTRA, IATSE 891, IATSE 669, Teamsters 155 and the DGCBC. Anyone who has ever worked on a set can tell you, the way they all work together is a thing of beauty; a great example of what people are capable of when working together. A disruptive personality does not last long in the film business.

We know it can look fairly chaotic on a set but it is quite organized and, in spite of what you’d think, the crew is very adaptable to changing circumstances. Time is money so preparation is key. Hopefully, in this column we can help demystify some of the apparent chaos. Questions are welcome.

Pain on the Mountain