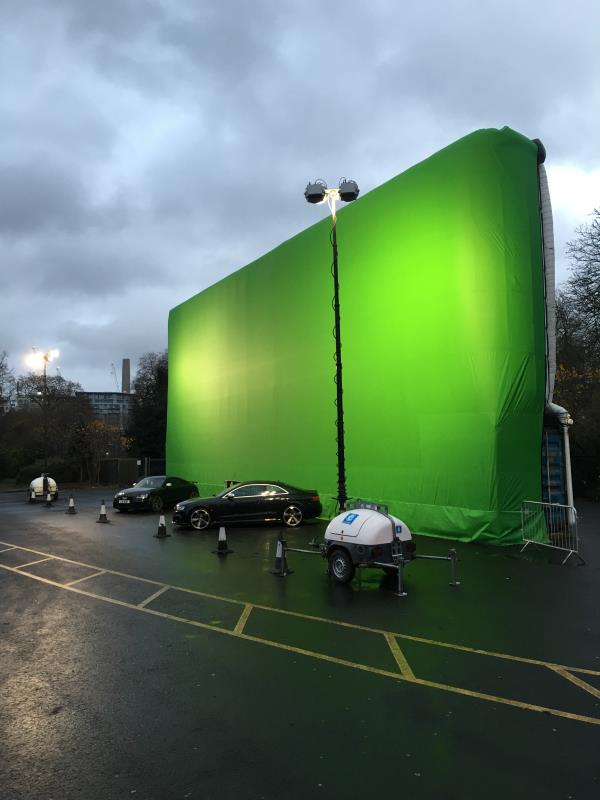 The Bouncy Castle is what some call the AirWall from AirCover, a piece of grip gear invented by Dave “The Mad Scientist” and his grip pals who all work right here, in the film production business in Vancouver. To this day, there are number of his crew who also call it the Bouncy Castle (that’s you, Robin) but the more series types, and the customers, call it the AirWall. Today, the AirWall has become ubiquitous in virtually every country that has much of a film industry but I feel fortunate to have been around to watch it develop from the beginning.

There is an old chunk of pavement in south Vancouver, near Canadian Motion Picture Park, where a number of facade setups were created with streets, buildings and intersections. This “backlot” was originally built in 2008 for the film The Watchmen and has been referred to as “the Watchmen Set” or simply “Watchmen”. In fact, in spite of people trying to change it, like so many places (Macgyver’s Cabin?) and things (C47 Clamp?) and sayings (This is the abbey?) in the film productions, the Watchmen moniker persists. It is still there. That wasn’t always a certainty but it survived and that is a good thing.

Although the facades have changed a little, the streets and intersections at Watchmen are still there with the basic framework, except it is much more fortified. It has been used by many shows after the original movie and it proved its value in a matter of months. Problem was, no production wanted to spend any money on upkeep so it was soon falling down and chunks were blowing away in the wind. It was Superman who, forced by BC regulatory agencies, finally had and spent the money to fix it up to the point it was a permanent fixture. Steel was added, heavier timber used and a lot of Styrofoam removed. As the Watchmen became more popular, some of the for-lease buildings adjacent were used for film production purposes: a workshop, a paintshop, costume storage and set piece storage, to name a few.

The Watchmen is on property originally owned by two Norwegian immigrant fisherman. The land, formerly called Riverbend because the Fraser River twisted there, was mostly peat bog. In fact, I used to have an office on the Watchmen set and one day, while sitting at my desk I watched as, one by one, the lights went off in the shopping mall across the street. Turns out the buildings were built on pilings into the soft bog but nobody felt it was necessary for the parking lot to have the same done. The parking lot decided to sink four feet in a second or less, snapping all the infrastructure underneath it, including the electricity for the lights. I feel bad for anyone who may have been in a bathroom.

Although it had been bouncing around in several grip minds for a number of years, the need for something like the AirWall was made spectacularly clear one day at Watchmen. An accident there helped identify the need. Up until the AirWall came out of Dave Mac’s brain, there were a few different ways you could put lights and rags (giant drapes of fabric used for various purposes) up in spots. None were ideal and the bigger the rag, the bigger the wall, the bigger the problem.

For a few years, 40 foot frames of aluminum tubing were used to put up “flags” to keep out the light. You have probably seen smaller versions anytime you saw a wedding photographer trying to capture the face of the bride in bright sunlight. The flag puts the subject in the shade so the light can be controlled. These 40 foot frames were eventually attached (illegally) to a man-lift and given the name “Fly Swatter”. This is all Grip stuff.

Sometimes, especially if the weather was scary, a telehandler was used to hold the frame because the max wind allowed for a man-lift is 25mph. A telehandler is a kind of big four-wheel drive forklift that has the forks out on a boom and that boom telescopes out to 50 feet or so. We started in 2007 with 9000lb telehandlers, then we went to 10,000, then to 12,000. The 10s and 12s are still in use today for this purpose and others, based on mobility and accessibility. The manlift “flyswatter” is also still used for smaller applications but, for larger applications, there is nothing quite like the AirWall.

When the rag wall needs to be big, and it needs to hang for weeks or months , it was once the standard to make a wall of seacans. These forty foot long, eight foot high shipping containers were usually stacked two or three high and as many strung together to make the wall as long as needed. Sometimes, people risked stacking them even higher. Sometimes they were cable anchored to the ground, sometimes not. Seacans we temporary, cheap, effective and popular. Problem was, they were not safe.

In a year I cannot remember, a show I can’t remember moved into Watchmen and built a stack of seacans for a greenscreen wall (Google “chromakey”) in the south east corner of Watchmen. They were stacked close to the fence of the lot, the pedestrian sidewalk and six-laned Marine Drive. I can’t remember if they were cabled down or not but they did not stay stacked that way. They were there for quite some time until the BC weather decided to whip up a big wind and blew the damn things over. It was a Sunday and no-one was around, thankfully, so no-one was hurt. Being reasonably intelligent people, the authorities thought we had done something very stupid. I won’t argue that.

* Fun place, Watchmen. Ask me about the exciting time part of the place burned down and lit up a gas line, creating a 40 ft high blow torch while city employees struggled most of the day to find the shut off valve. The city tried to blame the Norwegians but, it turns out, the city had accidentally paved over it.

I don’t know who thought up what but I do know I had many conversations, about alternatives to seacans, with many Key Grips and Key Rigging Grips around that time. We were mostly just bouncing (heheh) ideas around but that is always how inventions begin: a need, bunch of talk, ideas, prototypes, successes and failures, then a solution. Eventually, everything that was said and hear led to Dave Mac proposing something that became the AirWall.

On a calm, quiet, somewhat damp day, a group of people who would form a company called AirCover had gathered, at Watchmen without a movie to work on. Robin Say of the prestigious group of grips called to say I was invited IF I could bring a telehandler. I was intrigued and had a telehandler delivered to Watchmen. I was there when it arrived. Laying on the ground with a bunch of grips standing around it, was what looked like a giant white airmattress. Ribbed and square, I could picture it with a whole family on it floating down the Penticton canal with picnic gear and plenty of cold beverages on board, as well.

I had no idea what it was all about and no-one seemed to want to tell me. I stood discretely aside while they rigged the airmattress onto the telehandler and moved it around for a while, talking and trying different attachment methods and positions. After that day, I heard nothing for several months, although Robin told me I was gonna like what came of it. She was happy and excited about that. It made me think something cool was gonna happen and it did. In a short while, the AirWall and several cousins came to be and were a huge success.

AirWalls are cheap, mobile, of unlimited scalability and they setup very quickly. They are capable of withstanding up to a 50mph/80kph wind and, above that wind speed, you simply let them deflate and secure them to the ground. If you want to see Godzilla walk through a street the way a modern Godzilla does, you need an AirWall. Nothing else will do.

The “Academy of Motion Pictures Arts and Sciences was founded in 1927 and is the world’s preeminent movie-related organization, comprising more than 9,000 accomplished men and women working in cinema” (from the AMPAS website). Each year, nominees are put forward and voted upon by their peers in various categories. The awards, in themselves, a popular entertainment. Winning one is very good for your career and the statuette looks great on a bookshelf. Not that I would know.

The four grips responsible for the AirWall were awarded the Academy’s Scientific and Technical Award, or “Sci-Tech” Award, for the invention in 2014. It was much deserved and they received praise from all over the planet. It pleases me very much to be able to say I know them.