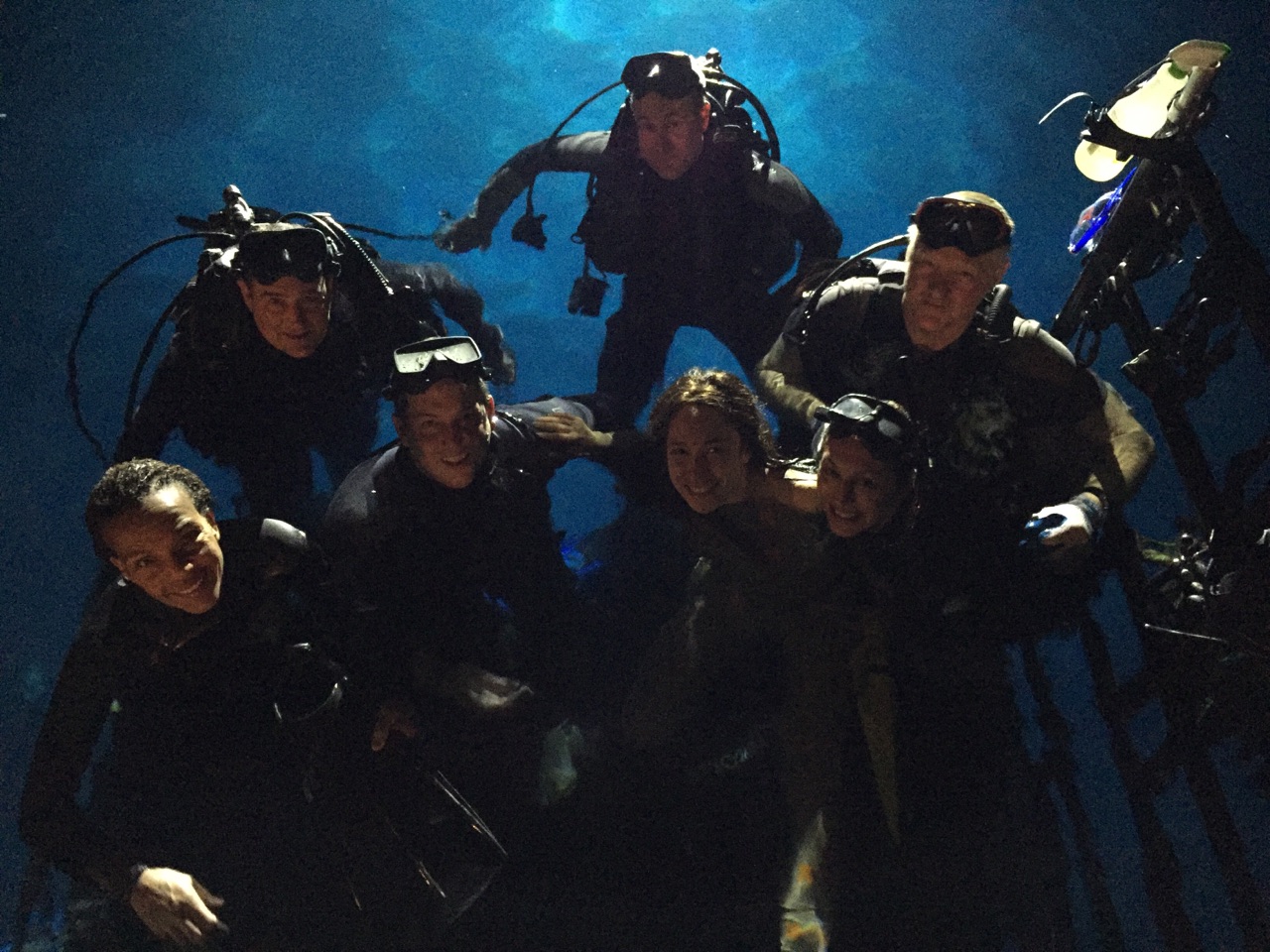 “Just breathe in nice and slow like we practised. Nice and slow. Exhale even slower, through pursed lips, twice as long as your breath in”. Free diving Instructor and safety diver Roberta Cenedese’s voice is calm and reassuring. “Are you ready?”

Stunt performer Lisa Chandler gives a nod. They are both standing on a scaffolding platform in chest-deep water. Roberta looks up and says, “Ready”.

Safety Diver Jeff Hotte has his underwater actor, Eline Powell, on a similar platform at the other side of the large water-filled circular tank. In full scuba gear he looks up to Joe Menendez, director and co-executive producer of Freeforms’ hit series SIREN, sitting in a directors chair on a 16 foot high scaffolding platform beside the tank, and gives a thumbs up.

“Braden, are you ready?” Joe speaks into a hand held microphone as he looks intently at a camera monitor from his chair at “video village” on the 700 square foot scaffold platform level with the top of the 16 foot deep by 48’ diameter steel tank.

Hovering in a mid-water position, Underwater Camera Operator and Cinematographer Braden Haggerty, is holding her camera steady on the marks they determined during rehearsals. She hears Joe’s voice on the underwater speaker. With a quick up and down nod of the camera she lets Joe know she’s ready.

Kim McNaughton, underwater housing technician and camera assistant, remotely operates some of the electronics of the Alexa Mini camera in the Hydroflex 5 housing. “Camera is rolling”, she says. Through the underwater speaker, Joe says “ACTION!!”

Stunt Coordinator Ed Anders, beside Joe at video village on the scaffolding deck, speaks into his on-set radio “Shaun! Pull number 1. “ He pauses for half a second and says “Pull 2!” Stunt rigger Shaun Magee’s burly team jumps into action at their rigging station on the studio floor just outside the tank, swiftly pulling on ropes that are threaded though elaborate pulley systems that are attached to the performers.

Suddenly everything comes to life underwater! The two performers, hooked up to fine but extremely strong lines, come flying into each other’s path in mid-water. A violent battle has begun. Braden keeps the action “on camera” as they spin and twist and battle each other. What now look like two girls in full-body spandex motion capture suits with a single fin will become two dangerous and deadly mermaids from the oceans depths.

Visual Effects coordinator Dan Dixon has marked their suits and fins with the reference marks he needs to create the amazing final product of some very real looking mermaids.

Braden moves the camera in closer to the action. She quickly pulls back a bit at just the right time. Thick black cables trail from the camera back to Kim on the surface. Kim watches her monitor and keeps everything in focus as the camera whips back and forth. Underwater Key Grip, Herb DeWaal, keeps Braden’s cables and her 30’ air hose from getting into the view of the camera as they both stay close to the action.

Braden pushes in tighter to Eline’s face just as Eline opens her mouth to reveal a set of very scary looking ‘vampire-like’ teeth. She sinks her teeth into the back of her opponents’ neck. Lisa is paralyzed and goes limp. Eline releases her and lets her sink to the bottom as Braden slowly pulls her camera backwards and straight up to the surface.

Joe is watching excitedly as he sees Lisa’s body appear to sink and disappear to the ocean depths. Kim helps out by electronically adjusting the zoom lens to add to the illusion of Lisa going further and further from camera. Joe says, “CUT! ME ENCANTA! PRINT! MOVING ON”.

The First Assistant Director, Michael Shandley, speaks into the underwater speaker, “That’s lunch, half hour, everybody out of the water”. Eline and Lisa calmly unhook their pull lines and continue sparring and practicing their underwater choreography under their safety divers watchful eyes.

Braden swims the camera back to the surface as Herb gathers up the cables. They get ready to hoist the heavy camera out of the water. Michael speaks into the underwater speaker “Excellent work everyone! Thanks for a great morning.”

The camera is passed to Kim as Eline and Lisa, still holding their breath, keep swimming playfully around each other. “Come on up you two!” says Michael into the underwater speaker. “Lunch time includes mermaids!”

Written by Herb DeWaal.
Herb has been a member of IATSE 891 since 1992. He typically works as a rigging grip and has also found a niche as an underwater key grip and SPFX diver. His underwater resume includes the TV show Siren as well as Man of Steel, Suicide Squad, Altered Carbon, and Deadpool 2. With over 100 underwater productions to his credit he is undoubtedly the most experienced underwater key grip in Canada. Herb is also well versed in SketchUp and uses it to design complicated rigging set-ups for studio sets as well as underwater projects. Sometimes he calls himself a writer.

Once More With Feeling…